A first ever visit to Tate Britain was the afternoon activity.
I was in heaven with the main exhibition. More information here and here.

When I walked into the room of Burne-Jones paintings I audibly gasped out loud.
He’s my favourite painter and has been for many, many years.
I love many styles and many artists work, but only BJ makes my spine tingle, my eyes widen and my jaw drop (I swear I did this too).
Here are a few of my favourites. 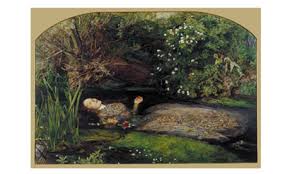 The detail on this dress was stunning.  Go look it up on Googleartproject and zoom in (see below). 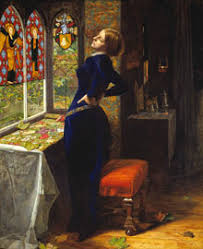 Ah yes, don’t we know that feeling of a stiff back and neck after sewing? 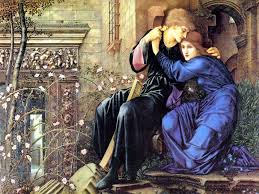 Love among the ruins.  Burne-Jones.

Am looking into getting a large poster of this work for the studio / bedroom.

Look here for more images.  What a wonderful resource at http://www.googleartproject.com

Other images at the Tate Britain were wonderful too – many of which I hadn’t seen before.

Think this is Pollock?

Art & Language (Michael Baldwin; Mel Ramsden).  Portrait of V.I. Lenin with Cap, in the Style of Jackson Pollock III.  1980. Enamel paint on canvas
A random mess, but not, at the same time.
Official picture here.

Despite the unwieldy title I was drawn to the very ethereal colours.

When you visit Tate Britain you can’t ignore Turner.
My good friend had advised me spend time in the Turner galleries and print room and I can honestly say I was utterly blown away.

Have seen Turner’s work in 2011 in the annual exhibition in Edinburgh.
But the work in the Tate was so varied and so ……wonderful (have I used that word too much in this post? Probably).

Turner made several drawings and paintings in Northumberland.  Norham is very close to home, making it all the more special.

This might not look very interesting, but it was!  Its a wall, with a map of Europe showing how the colour palette Turner used changed with his travels.
More information and a better photograph here.

I stopped and listened to a gallery talk and was amazed at how much I learnt in 10 minutes.
War in Europe stopped a “grand tour” when Turner was younger, however when he did start to travel his work changed immensely.

The main features being “yellow” (Turner started to use a lot of yellow to bring light and warmth to his paintings) and “perspective” which he used very successfully to draw the viewer right into the picture.
I tried to capture this with the photo below, where you can almost step into the picture and walk along the lane.

Turner.  Music Party, East Cowes Castle. c.1835.
Oil on canvas.
This is an unfinished canvas but I loved the atmosphere and colours.
Something in it just clicked with me.
Official picture here.

Details….. I loved the details and the figures that were there, but weren’t there.  Details only suggested, but also visible.

A book landed on my doorstep not long after I arrived home.
Turner in the Tate Collection

I caught the 17.00 train from Kings Cross > Berwick Upon Tweed where DS and DH collected me and drove me home; one exhausted, but very happy and inspired stay-at-home mummy/artist/tutor/ex-biologist!

Did I really cover all that ground from the 11.55am arrival in London on Friday to leaving at 5pm on Saturday?
Can’t wait to to do all again in the spring.